A Brief History of the Club 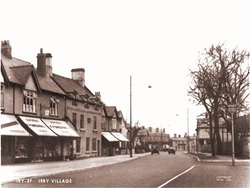 During the early 1930s some local men, many of them agricultural workers, had
been meeting at the home of Joe Roberts at Hillside Farm, in School Lane,
Thurstaston to play billiards. Joe and his mate, Frank Dodd, along with a
number of other local lads were toying with the idea of starting a club,
but they needed 26 members. They got the 26 names at their second meeting
in 1933 and the Irby Club was formed.

The Irby Club, formerly Rookery Farm, in the early 1950's. Along the road is the Prince of Wales pub; shortly to be demolished That summer things were given a gee up due to a fall out at  the local pub, the Anchor Inn. Irby was still very rural in those days and there  were quite a few working farms, between them employing two or three dozen men at  harvest time. As always during haymaking, the most had to be made of good weather and the men worked late into the evening to get the hay  in before it rained. In those days last orders at the bar were 10 o'clock, so, one of the lads was sent to the Anchor Inn just before closing time to order the farm workers ale. One hot summer’s night things went wrong, whether the pub was full to the gunnels and the pints could not be pulled before the towels were up or what, I don't know. But the upshot was that when all the farm lads arrived just after 10 o'clock spitting feathers and in a lather of sweat, there was no ale for them and some told the manager where he could stick his pints in future.

The Rookery Farm in Irby Village ceased working during the early 1920s, after  which it became a private school for a few years and then a meeting place for the Irby Literacy Society. During the early 1930s it became vacant again. With the help of Yates' Brewery, the Irby Club took over the Rookery Farm house in the summer of 1933. The Club employed builder and founder member John Cornelius Devaney (After whom Cornelius Drive is named) to convert the farmhouse for use as a club. John completed the work and the Irby Club was opened at the end of August 1933. Very soon more local men joined, swelling the ranks to 145 members, paying a yearly subscription of 5 shillings (25p) and one penny per week subs. The first Club steward was Percy Hayward who was paid a weekly wage of £2.18s.0d (£2.90p) 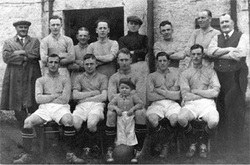 In 1934, the directors and players of Everton Football Club were invited to the Irby Club to play a table tennis and billiards competition. The footballers came to Irby and beat the Club teams by 5 games to 2 at table tennis and 307 to 184 at billiards. Everton and England centre forward, William Ralph "Dixie" Dean, formerly of Tranmere Rovers and Pensby F.C. took part and by all accounts he and the whole team had a great night. A bowling green was set out to the rear of the Club but before the war it
became overgrown and in the early 1950s a lounge extension was built on it. The
club was extended further, when, during the 1970s, the small adjoining shop
which had formerly been Mills the cobblers and later Fraser Bell's jewellers was
incorporated into the bar. At this time women were first allowed into the Club, but only in the lounge and only on a Saturday night, this was soon extended to every evening. In 1975, the Stewards flat was extended and so was the lounge to its present size. In the early 1980s it was decided to repair and renovate the Club and completely modernize the lounge. This was made possible with the help of a loan from Wilson's Brewery. In 1990, the men only bar and television room were renovated and a year later the lounge was re-modernized and the seating altered.

During the digging of the foundations for the lounge extension an old tunnel was broken into which once led from a cellar under what is now the bar and accessed via a hidden trapdoor in a storage cupboard. The cellar looks like a smugglers den. During the 1700s a lot of smuggling went on along the Dee coast of Wirral centered around Heswall and Parkgate with a lesser amount in and around the small port of Dawpool in Thurstaston. The smuggling must have been reasonably serious as in addition to the six customs and excise officers at Parkgate, a riding officer patrolled the area from a watch house at Thurstaston beach on what is now the site of Shore Cottage (Sally's Cottage) below the cliffs.

The rock storage plinth in part of the cellar 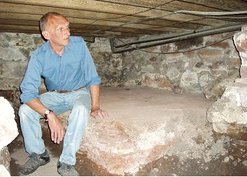 The smugglers were all local tradesmen by day who occasionally came together at night to smuggle contraband from the shore up to Heswall, Irby or Thurstaston by packhorse, sometimes via the Dungeons. The next morning, farmers (usually friends and relations) drove sheep and cattle down the lanes and tracks to obliterate the smugglers "run". In the following days when things had quietened down, farmers often delivered goods under cartloads of turnips and hay etc. Smuggled silk and linens etc. along with good wines and brandy went to the local sentry. Rum, whisky, geneva and tobacco was readily bought by inn and alehouse keepers.

The Anchor Inn has been serving drink since at least the 1770s and there were alehouses in Irby and Thurstaston before that. At one time Thurstaston had three alehouses. There were still two in Victorian days, one was called the Glegg Arms and an even older one was either the Dog and Partridge or the Hawk and Partridge.

The cellar is a fantastic hiding place  and there is plenty of room for a  large amount of contraband to be stored. There is a raised area cut out of the rock where perishable goods would be stacked as years ago, during heavy rains, a little underground stream ran through the cellar and down the tunnel which acted  as a culvert. The tunnel originally came out in Back Lane (now called Manor Road) which was very quiet with fields on one side and orchards on the other. From Back Lane smugglers could slip quietly away in any of six directions. Every now and again something is discovered which makes you think of smugglers. During the late 1920s houses began to be built along Manor Road. Whilst working in his garden one of the occupants dug up a stone block with a special mark or sign
chiseled on it and underneath found a number of George III coins.

In 1971, workmen digging in Thurstaston village discovered a  smuggler's tunnel cut in the rock leading in the direction
of Thurstaston Hall.

The tunnel which once led to Manor Road 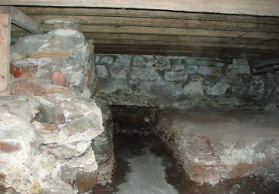 Today, the Irby Club still provides many local men with a relaxing safe haven
with beer at under £2.00 a pint. But strange to think that in centuries past the
Rookery was bought and sold with money made from the suffering of others. All
the old buildings in Irby Village which became drinking houses, the Irby Club,
Anchor Inn, Shippons Inn and the long since demolished Prince of Wales (called
the Victoria when first opened) were all owned by plantation and slave owner,
Bertie Entwisle of Antigua in the West Indies. The Rookery and the Prince of
Wales were later sold to J.R. Shaw of Arrowe Hall, Arrowe Park whose inherited
fortune was made in the Liverpool slave trade.